No prizes for guessing the breakfast choice today. To be honest it’s a safe option and uncomplicated – just what I need. Did keep things a little varied though and went for a different cereal today!

Today was one of those days where simplicity ruled. I had a couple of ideas in mind, helped by a short shopping trip where I picked up the basics. My dad’s interest in food had waned somewhat so I just grabbed a few things I knew he wouldn’t have in.

Back at the house lunch beckoned and he suggested – of all things – a ham sandwich. Time for my plan to come in to play. Is already purchased a tin of spaghetti (which he hates) that morning so I said I’d have that on toast while he had the sandwich. Awkward moment avoided and another successful meal for my dad!

Dinner was easier. I’d bought some pizzas earlier and just had those along with chips between us. Yes, all of the meals were plain but I was still quite happy.

I did have a few close calls though. My dad (as my mom always did as well) has a habit of offering cakes and biscuits at the same time as coffees and cups of tea. I’ve had to be cautious without seeming obvious as I’ve checked everything. Good job as well as a few things have had gelatine in them so I’ve had a few lucky escapes.

A mixed day here as I was returning home and a large part of the day was going to be spent on trains. I don’t really like eating when I know I have to travel incase I need the toilet so I wanted a light breakfast. Cereal again I guess!

I took plenty of snacks with me for the journey but didn’t feel like eating for the first two legs. To be honest I’d noticed some side effects of the new food regime all week. As my body had been adjusting I’d felt the need to use the toilet more often than normal. I hope that’s just to be expected!

After a couple of hours I knew I needed to eat so I had to grab something. Reluctantly I opted to use one of the food outlets at Cardiff Central Station. Station food usually frustrates me on several levels. Prices are exorbitant and I seldom find anything I like. It’s even harder now and when it comes to sandwiches there seems to be an industry obsession with mayonnaise – something else I can’t stomach!

Amazingly I found a plain cheese sandwich, no mayonnaise. Sorted! Only downside was the price at just under £3 but I couldn’t be too picky.

One meal to go and I’m safely past the half way mark. Before getting home I made a quick stop off at the shops and this gave me inspiration for tonight’s main meal. Having put a long journey behind me I wanted something simple but ideally comfort food.

Quorn came to the rescue with a helping of their nuggets from the freezer. The shopping trip? That added an unusual element. I discovered cheese burger flavoured super noodles and they seemed like a strange but perfect match. 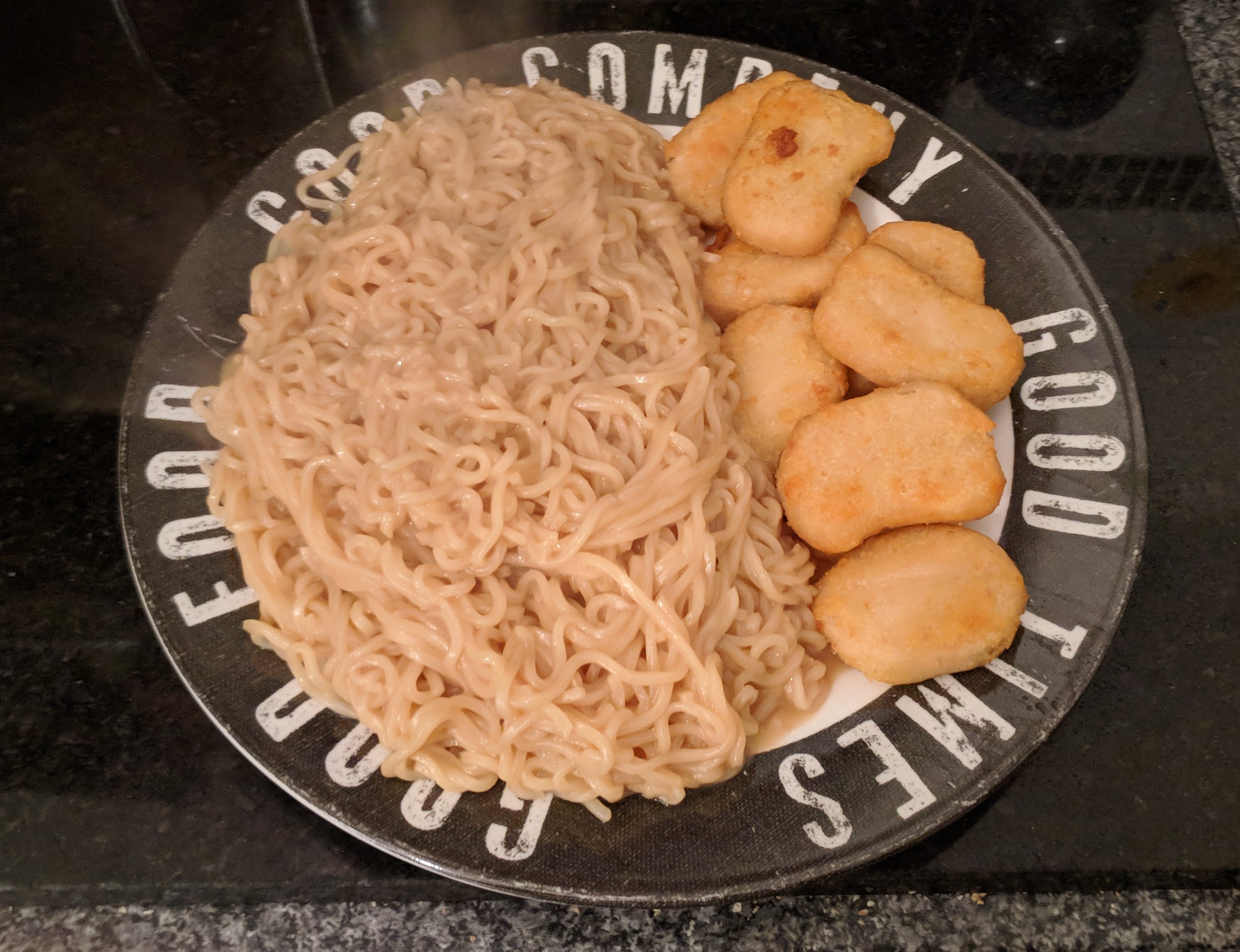