Fast forward several years and I’d moved on from the Amiga, and while I owned a couple of PCs they were only really being used for practical purposes. I had no interest in PC gaming, but I had taken an interest in console gaming, specifically the PlayStation family, being a day one adopter of the original PlayStation and then the PlayStation 2 a few years later. However, I found myself missing the older games and simpler times. For all the enhanced visuals and sound offered by Sony’s consoles, I was missing the 8-bit and 16-bit era so I actively started to rebuild my former Commodore collection. I still owned my original Vic 20, so I then added a cheap Commodore 64 to the collection and started – casually at first – getting a few games from my childhood… and amongst them were some of my old Mastertronic favourites. The seed was sown.

The Mastertronic Collection Is Born

It’s all my wife, Trish’s fault. That’s what I keep telling everyone when they ask, anyway! We’ve never really bought each other what would be thought of as “traditional” gifts for each other for special occasions. DVDs, CDs, games… generally we get each other things that we know we’re going to enjoy and get something out of – I guess it’s just our way of doing things.

Back in 2016 my wife was trying to think of ideas of what to get me for Valentine’s Day and the idea of games came up. Usually the first option that came up were PS Vita games or the odd retro game or two, but while browsing online I found a retro games store that had a bundle of Commodore 64 Mastertronic games for sale – 40 games for just over £20. The offer was too good to be true, Trish thought so as well and a few weeks later I had them in my hands on Valentine’s Day and it started off something that quickly grew into a monster!

Having rekindled my fond memories for Mastertronic and their range of games, I set out to pick up more for the Commodore 64 and to complete the Vic 20 range. When I later picked up my first ever ZX Spectrum later that year, Mastertronic was again at the forefront of my mind so I headed straight to eBay to find a few inexpensive bundles of Mastertronic games to get my collection off to a flying start. Within a few short months I’d amassed a few hundred games spanning several platforms I owned and it started to dawn on me that it could be quite a fun – and affordable challenge to collect the whole range. 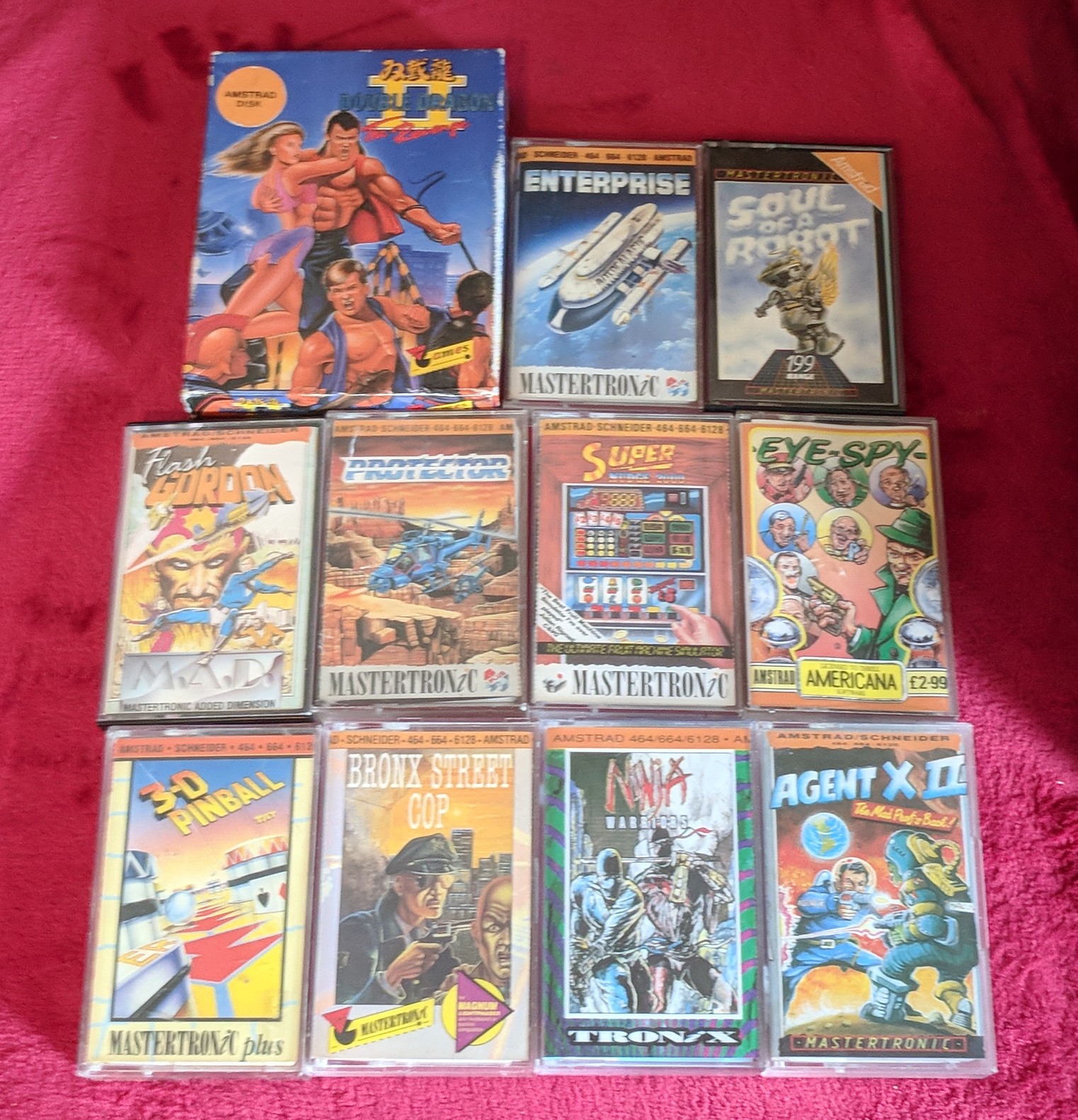 That probably wasn’t my most sensible idea I’ve ever had. It turned out that Mastertronic had released a lot more games than I imagined over the years, and for far more systems that I realised as well. The original range spanned 310 titles across 10 different platforms making it something of a daunting task… and that was before I took into consideration the 16-bit releases for the PC, Amiga and Atari ST, the 8-bit disk releases and international exclusives. Then I had to take all of the additional labels into consideration such as M.A.D and those that covered re-released games including Ricochet, Americana and Rack-It.

Even after that there was no let up. At the end of the 80s, Mastertronic bought out fellow publisher Melbourne House and in a moment of madness I decided to collect all the titles released after that buy-out had taken place and equally games released once Virgin software stepped in and joined forces to form Virgin Mastertronic. As such, they too found a place in the collection!

Not put off by the potential size of the collection, I didn’t even stop there. When Virgin Mastertronic was finally absorbed into SEGA Europe and disappeared, the company was “reborn” in 2004 under the name The Mastertronic Group. With one of the original owners in place, they focused initially on budget PC releases, starting with the acquisition of rival PC publisher Sold Out. As you can already guess, they too had to find a place in the collection.

A console range soon followed from this “new” Mastertronic specialising in character licenses for the PlayStation 2, Wii and Nintendo DS and while the games themselves aren’t particularly good, they too had to be added. By this point, the potential size of the collection was starting to look absurd and my growing checklist was well into four figures.